someone in the Tory press machine is sniffing the wind and asking themselves whether unadulterated greed and vilifying the least fortunate in society are the best ways to woo voters. Maybe not, they think, look how many people voted for Corbyn.

Just one week after Jeremy Corbyn consolidated his place as leader of the Labour Party, the influence of a truly left-wing opposition is showing itself on the Tory party.

Instead of the usual gung-ho headline-grabbing first day of conference announcements, we have a relaxation of the onslaught against disabled people begun under Cameron’s administration. It’s only a little concession and doubtless still leaves many with the stress of unnecessary regular assessments, but it was accompanied this morning by a little strap line – we don’t want to be the nasty party.

It probably wouldn’t have happened under Cameron, but does it prove that Maggie-May is a kinder politician? I don’t think so. She is a Tory after all, and so far channelling Margaret Thatcher as much as possible, hence my nickname. But obviously someone in the Tory press machine is sniffing the wind and asking themselves whether unadulterated greed and vilifying the least fortunate in society are the best ways to woo voters. Maybe not, they think, look how many people voted for Corbyn.

It’s good that this has happened. We need the extreme right-wind to self censor it’s worst elements. But we also need to be clear that Torism, with its support for austerity and big business, is still vile in tooth and claw. As the debate moves on, it’s even more important to establish the clear blue water between Labour and the government. 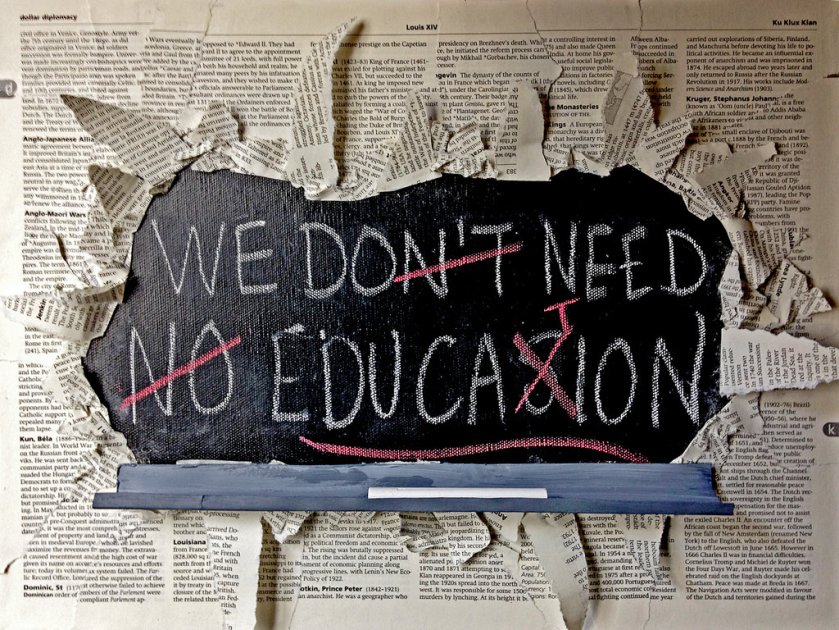 Artwork by frogs and pigs

To me, it seems to be pretty basic and fundamental that educational opportunity should be the same for any child born in the world. It’s a basic human right to have an education, so why should any country wish to dilute that right by creating selection? Any type of school which operates criteria for entry starts to compromise equality of education.

People who have a problem with social equality support selective education. Tories have always condoned and supported fee-paying education, the principle of grammar schools,and more recently the direct intervention of business into running what were previously ‘state’ schools. Isn’t it pretty obvious that these things are just an expression of the ‘survival of the fittest’ mentality of the right? They only appeal to people who feel that they will naturally be able to access a privileged education because they have money to spend, either on school fees, coaching, or by moving house to a better catchment area, or aspire to doing any of these things. That not everyone can do this is something that is rarely challenged in the MSM, where most people working have benefited from some kind of privileged educational background and want their children to as well, and therefore don’t want to rock that particular boat. Any argument against selection can be countered by finding a couple of people who anecdotally did well out of state education and might be prepared to say that that proves that everything is OK, the system sorts itself into equilibrium.

So here’s a simple plan. Abolish privilege in education. First close public and private schools over night. Liquidate their assets, many of which are now substantial. This is why it’s no longer enough just to abolish their charitable status (atrocious as that situation is), because as a former Eton headmaster revealed in a talk I heard, they have been investing in all sorts of corporate and educational deals all over the world. This is in order to build profits so that they could continue exactly as before when that status was revoked, and they could immediately stop taking the quota of ‘disadvantaged’ pupils which they are required to to pay lip service to being charities. No one is going to take their privilege away without them putting up a fight. So just close them.

Abolish all other selective schools. Abolish trusts and academy chains and free schools, and why not schools that select on the basis of faith at the same time? Any money saved goes into state schools. LEAs run them, as they did for a long time, seemingly without the number of scandals and scams that regularly come to light now we have schools sponsored by organisations which aren’t educational in nature. Let it be normal that children go to school in the area they live in. Not a bold social experiment, just something that seems fair. Sort of a national educational service. After all, we had the simple for the NHS and that’s a principle worth saving.

There’s been a lot of talk about us Trots, rabble, dogs and our membership of a mass social movement. I’m using ‘we’ because it’s only in the last week that I’ve officially joined Momentum, so I’m still an excitable newbie. I joined shortly after renewing my membership of the Labour party itself. I only joined Labour to vote for Jeremy Corbyn in his first leadership election (despite having been a socialist all my life), and I wouldn’t have renewed if he hadn’t been on the ballot paper this time. I’m the type of person who only joins things if I think it’s really necessary.

And now, I feel, it’s really necessary to join, and be part of what’s been derogatively termed a ‘mass social movement’.

Why? Well, it was summed up for me in a TV interview that other day. I overheard (because I no longer actively seek to listen to MSM) an interviewer asking someone if it was more important for Labour to be electable or to be a mass protest movement. This dichotomy in itself enraged me. What is democracy if a mass movement, something that people want to join and embrace, has little impact on electability? If Owen Smith, whose views are either borrowed from Jeremy Corbyn or Ed Milliband, and have the internal coherence you would expect from that mix, is deemed ‘electable’ by the Westminster literati; whilst someone who can draw crowds so large that he regularly has to do a second, outdoor gig, is regarded as a joke by some in his own party, and regularly deemed ‘unelectable.’

We are living through politically and socially turbulent times. There’s a lot of talk about how people are disaffected with politics, and with politicians. That they are turning to ‘extreme’ forms of politics, and charismatic leaders. Often this talk is followed by a list, and Corbyn’s name put alongside Farage, Trump, and other so-called populist politicians. But us ‘Corbynistas’ are different. We are not following because we think Jeremy Corbyn is someone we would like to have a drink with down the pub whilst quietly airing our non-politically correct views about immigration. We are not following because it’s fashionable, or because we don’t normally see the relevance of politics in our lives. We are not following because the leader delights the media by saying things which were until now considered offensive and unspeakable in polite society. We want a return to old Labour-party values, where each person was regarded as equal, and where a mass movement based on sound principles, articulated carefully and in a reasoned way, can challenge mainstream views.

This is how progress has been made in the past. Things change because people come together to create societies where it is acceptable to be different, to have different views, and sometimes for those views to prevail. I want my (Labour) MP to realise that it’s not OK for her to rely on my vote, and then vote with the Tory government when she herself feels that’s it OK. I want her to think about the views of her constituency when using her vote for a party leader, rather than telling me that she herself thinks it’s time we had a woman, so that’s the way she is voting. I want her to send me a regular email, as my MEP has done each month, to explain what she’s doing and how she’s voted, and ask me to get in touch if I’d like to talk about policy. Because that’s not happening, because my vote in a safe Labour seat seems to be being taken for granted, and because I can see many people like myself who want these things to change. That’s why I’ve joined a mass movement.

To start the blog off, here’s an extract from a guest blog I wrote for NewLeveller.net. I’ve been delighted to be able to add to a blog which is always on the cutting edge of politics. You can find the full post, and lots of other interesting material with a left wing/ Republican theme here  You can also follow @NewLeveller on Twitter here

Although written a while ago now, and those weeks certainly have been a long time in politics, the post is still a bit relevant, I think.  Particularly with yesterday’s row over the crony resignation honours list.

I wanted to pause a moment and reflect, before the history books start to be written, before the entry which ends with ‘succeeded by Teresa May’ is written as if this happened as naturally as night follows day, to assess David Cameron’s contribution, his legacy. It’s all been said before, nothing new here, but I wanted to collect some of it together, before we all move on and forgot some of it. How bad it was.

He walks away with a little hum, anda ‘right,yes’, saying he’s going to leave ‘the s***’ he’s just navigated us all into to others to sort.It’s a day at the office for him, another day. Sometimes it’s been like a game for himand his chums (they are all ‘chums’ in the Tory party, apparently, when they are not stabbing each other in the back in the scramble for power). Nick Robinson compared it to Game of Thrones, and he should know because he was a close friend of all the Bullingdon boys.  Nick could have been there sharing all that power with them if he wasn’t busy producing a stream of right-wing propaganda for the national news organisation which helps keeps them in power.  He helps to share the power in his own way, by stifling other views.